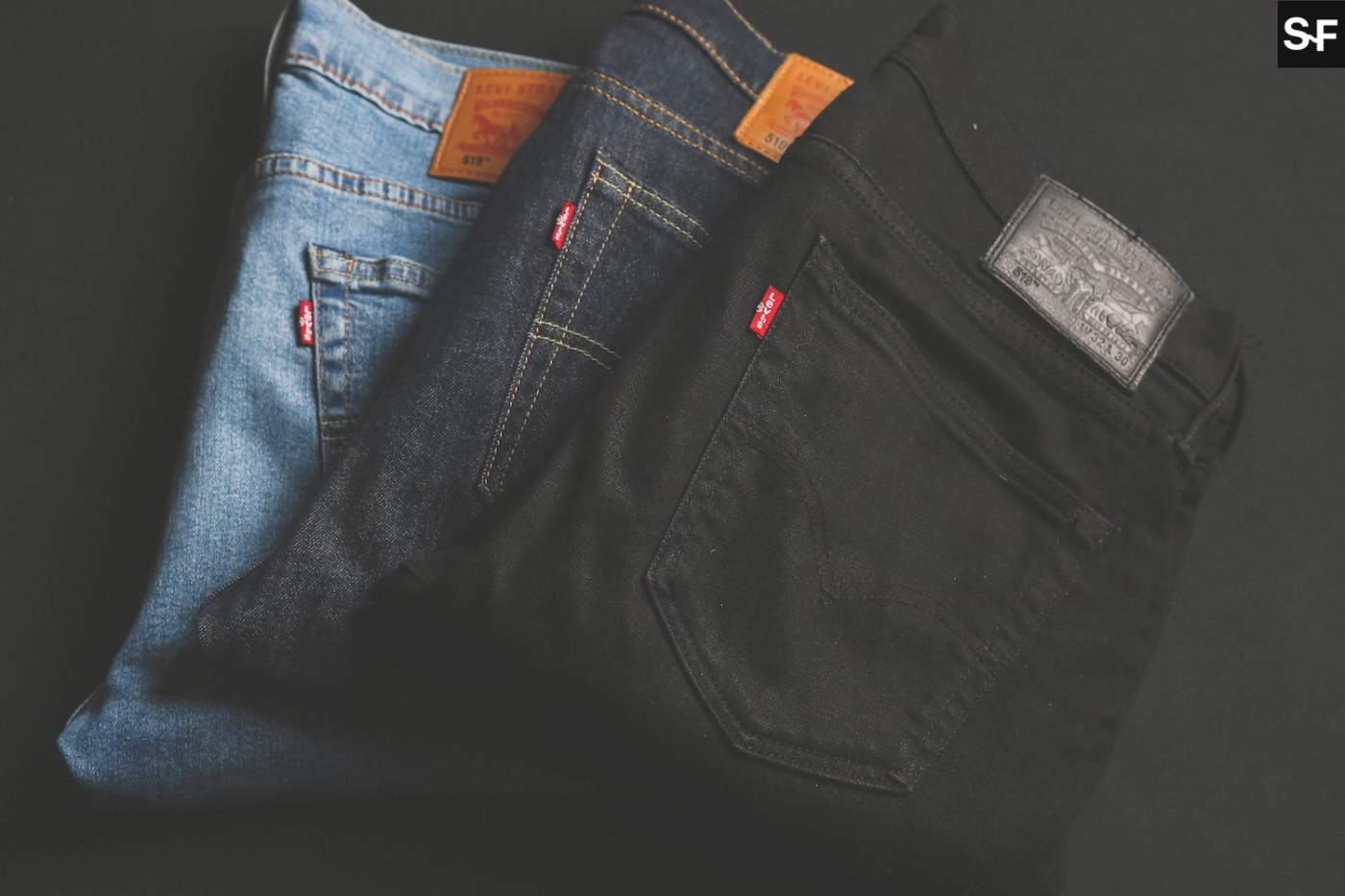 Denim – The History Of Jeans

The actual history of denim is shrouded in mystery. Since the late-19th century, jeans have gone from rugged workwear to fashion apparel that we couldn’t live without. Social, political, and pop culture have all played a role in denim’s evolution, and the trends that have come and gone and come back again throughout its nearly 150-year history. Today, denim is considered a wardrobe essential. They have become an integral part of everyday life, so much so that most of us never stop to question where our favourite pair came from, how they were manufactured, nor their history. Despite the range of innovative materials available, denim remains one of the most versatile, durable and highly sought after fabrics on the market. Jeans transcend gender, age, and class, with most people owning more pairs than there are days in the week. Their appeal will always be timeless but the design and the fabric technology involved will forever evolve with the times. This fabric came from humble beginnings to a giant of the clothing industry that is estimated to produce $129.8 billion of retail sales by 2021.

The origins of modern denim fabric can be traced back to Genoa, Italy and Nimes, France. A sturdy cotton indigo-dyed fabric called bleu de Gênes (blue from Genoa) was produced in Genoa, Italy. When weavers in Nimes, attempted to replicate the cloth from Genoa, they produced a serge fabric (heavier, twill woven fabric) called serge de Nîmes (serge from Nimes). Bleu de Gênes is the origin of ‘blue jeans’ and serge de Nîmes is the origin of the word ‘denim’.  By the 17th century, the fabric was vital to the working class in northern Italy. Early cargo lists indicated that these low-cost, durable fabrics were shipped beyond the local regions to northern Europe.

On May 20, 1873, Nevada tailor Jacob Davis and San Francisco dry goods merchant Levi Strauss was granted a US patent for copper rivet reinforced work pants leading to the first modern blue jeans. Early on, the sturdy trousers, called “waist overalls”, proved very popular with factory workers, ranchers, miners and farmers.  Jeans remained popular in the west and competitors who produced denim trousers and overalls for cowboys and labourers soon followed.  It was only after the 19th century that competitors for the denim market began to appear: namely Wrangler (1905) and Lee (1911). Among the early 20th century manufacturers were the HD Lee Mercantile Company and the Great Western Garment Company, a Canadian company, which was fully acquired by Levi’s in1972.

Jeans as workwear continued throughout the 1920s and 1930s, especially in the American West among miners, cowboys, and labourers. But it wasn’t until Hollywood took this trend to the silver screen with its Western films that jeans entered mainstream culture. On the fashion front, Levi’s became the first item of clothing to have a designer label on the outside. And Vogue featured its first model in denim on the cover in the ’30s, hinting that jeans could perhaps be a fashion statement and not just sensible clothes for working folk.

Up until the Second World War, denim jeans still weren’t highly popular. Jeans were seen for being what they were at that point: A work clothing option that was rugged and comfortable to wear. It was only when residents of eastern states started to travel to the American West for vacations that the concept of jeans caught on. In the 1940s and early 1950s, it was fashionable to go to the western states for vacations to experience a whole new way of life- that of a working cowboy. For the people of the eastern states, who lived in suburbia, this life was intoxicating, and jeans were part of the package. So they took them back home, and these types of pants became a big trend among the average American.

The dark hue and stiffness of denim made it a popular fabric for trousers in the 1950s. Zippers were incorporated for the first time in 1954 and the younger generation began to wear denim trousers as leisurewear. As more and more people began wearing denim they began referring to them as ‘jeans’ rather than denim overalls. Meanwhile, movie star icons such as Marilyn Monroe have reimagined the denim jean as an empowering and moderately sexualised style.  James Dean and Marlon Brando redefined the humble denim jean forever with their highly stylised roles in cult movies such as ‘The Wild One’ and ‘Rebel without a Cause’. Naturally, everyone wanted to emulate these idols. Culturally, jeans became a symbol of the youth rebellion during the 1950s and 1960s as college students started wearing them as a protest against the Vietnam War and the formality of the establishment.

At the same time, denim jeans became popular among motorcycle boys and juvenile delinquents, largely influenced by these screen idols. Straight-legged jeans became associated with these rebellious figures, which led to many US schools banning them from being worn. Other countries quickly started to get accustomed to wearing jeans too. American servicemen on duty in Europe and Japan would often wear them when off- duty to show that they were Americans. The denim jean became a cultural signifier. The trousers showed the world a happier way of life; something that people needed, especially after what they had endured during World War II.

The break-with-tradition spirit of the ’60s carried into the ’70s, a decade which came to symbolize a fresh, wholesome, all-American sexuality. This was embodied by cool girls of the times, such as Charlie’s Angels actress Farrah Fawcett and model Lauren Hutton. Silhouettes started to look smaller, with slim-fitting, straighter leg jeans and denim skirts and vests becoming in-vogue fashion items. Inspired by Catherine Bach’s character in the popular TV series The Dukes of Hazzard, barely-there cut-off shorts became a major fashion trend at the end of the decade and into the next. As demand grew for flared and bell-bottom styles, the trend spread from the US to Europe and was no longer associated with the niche hippie movement. Denim jeans became the go-to style for youths in all areas of life. Decorated denim also rose in popularity as people chose to customise their jeans with sequin, embroidery, paint or beads. Denim jeans became a sartorial route to individuality.

In the 1980s, denim managed to sneak itself into other subcultures such as punk, grunge and rock. New finishes such as acid wash became popular and the denim skirt and ripped jeans make their mark in the sector too. The 1980s was also a pivotal point for denim as more fashion designers began incorporating the fabric into their collections. Brands such as Calvin Klein and Armani launched designer jeans for the first time, ushering in the age of premium denim. Adriano Goldschmied, the father of premium denim, also helped popularise a new denim fit in the ‘80s – the skinny fit. Some designers followed in his strides with jeans so tight that customers would need to lay down in order to zip them up. Denim fashion changed again in the ’90s, thanks to the rise of grunge and hip-hop. Straight-legged jeans, sometimes ripped, other times not, kept things casual and Cobainesque. Mom jeans a.k.a. high-waisted jeans with a more relaxed fit were also very fashionable and have recently made a comeback.

Denim’s status as a counter-cultural fabric paved the way forward for many youth style trends that continue to shape the fashion industry. This fabric remains an iconic image of Western clothing, and the adoption of jeans by Western women has also caused these types of pants to serve as symbols of women’s liberation.  Jeans transcend all age and economic classes. They are equally enjoyed by the rich and the poor as well as the old and the young. It’s possible to buy a pair of denim jeans for less than $25, but designer forms of these pants can cost hundreds of dollars per pair. High-quality designer jeans are now seen as status indicators, and the high degree of customizability associated with these types of pants makes it possible to produce jeans that appeal to each consumer class.

To this day, jeans remain the most popular types of denim garments. From skinny jeans to bell bottoms, there are tons of different styles of jeans to choose from, and these types of pants are equally popular among young people and old folks from the United States to Germany to India and beyond. In addition to jeans, denim is also used to make several other garments. For instance, denim skirts and shorts are both popular, and some consumers even like to wear denim jackets. Denim garments remain popular in part due to their durability. A high-quality pair of jeans can last for years or even decades, and these types of pants look better as they age, which adds to their appeal.

Mirroring the direction taken by the fashion industry as a whole, brands are being steered by consumers’ concerns over whether or not their products are sustainable and the denim manufacturing market is responding to this. While many premium brands have honoured sustainable practices for some years, the launch of denim ranges from rapidly growing fast fashion retailers and a strong performance from those pioneering premium brands is also helping the breadth of the denim industry to thrive.  Wrangler’s Icon collection is made from 20% recycled denim, while Jack & Jones relaunched its low-impact denim range last year. Meanwhile, Primark has launched jeans made from 100% sustainable cotton.

If you are looking for more sustainable jeans brands, here is a list of brands that are combining ethics and quality together to revolt against the trends of fast fashion and irresponsible production: